What’s This Green Stuff? A Breakdown of Plants vs. Algae in Barnegat Bay 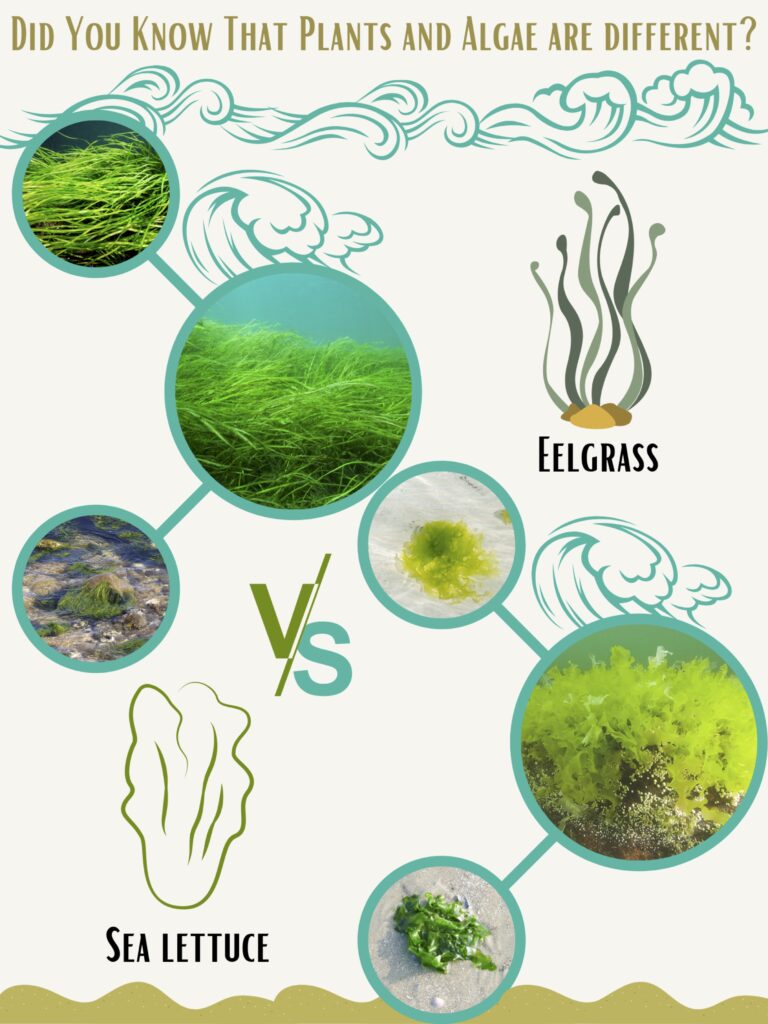 When you’re out wading in the bay, there’s plenty of green life out in the water to see. You may wonder: what exactly is all that green stuff out in the water? It turns out that the submerged aquatic vegetation, or SAV, in Barnegat Bay is more complicated than it may initially seem.

Two common forms of SAV in the Barnegat Bay are eelgrass (Zostera marina), a plant, and sea lettuce (Ulva lactuca), a type of algae. While they may both look similar at first glance, the two species are actually very different, and because of that, they act and respond to changes in the water in different ways. To fully understand why these two species are so dissimilar, we need to first examine the similarities and differences between plants and algae. 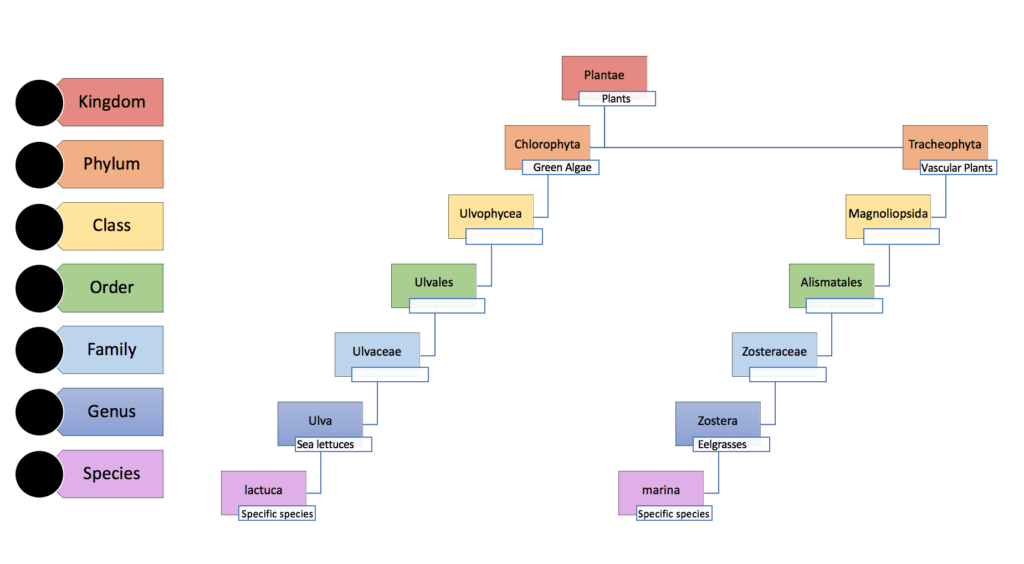 Although both sea lettuce (Ulva lactuca, left) and eelgrass (Zostera marina, right) are members of kingdom Plantae, their taxonomic similarities end there. For example, they are both part of different phyla, as sea lettuce is a green algae and eelgrass is a vascular plant. Image credit: Brianna Hoegler.

Eelgrass and sea lettuce are both members of the kingdom Plantae. This kingdom includes land plants, aquatic plants, mosses, and green algae. Many members of kingdom Plantae, including both eelgrass and sea lettuce, have the ability to use chlorophyll to convert solar energy to matter. This process is known as photosynthesis. An important byproduct of this process is oxygen, which many organisms, including humans, need to survive.

However, there are fundamental differences between organisms classified as strictly “plants” and organisms known as “algae.”

So first let’s answer this question: What is a plant? There is no one definition of what a plant is, but there are some generally accepted traits of organisms considered to be plants. For thousands of years, all living things were classified as either plants, which are stationary, or animals, which move around to find food. Now, we know that these two classifications are too broad. Many species that would have once been classified as plants are now classified as other types of organisms, such as fungi. Living things that are recognized as plants generally share a few traits. First, all plants are eukaryotes. Eukaryotes are organisms whose cells contain membrane-bound structures called organelles, which all carry out specific tasks in the cell, and a nucleus, an organelle that acts as the “brain” of the cell. Plants tend to be multicellular organisms, meaning that the entire organism is made up of many cells. Plant cells also have cell walls made of cellulose. Finally, plants tend to carry out photosynthesis using organelles in their cells called chloroplasts. 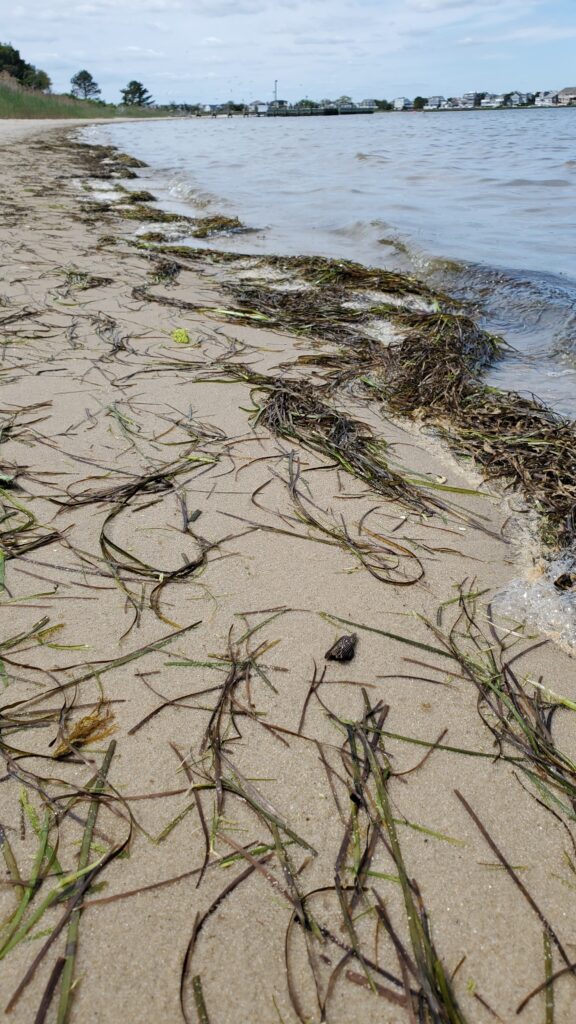 Eelgrass, a common type of SAV in our area, is a type of vascular plant. It is attached to the soil by its roots, and it obtains most of its nutrients from the soil. Photo credit: Save Barnegat Bay.

Next, let’s answer this: What are algae? It turns out that there is no one simple answer to this question. While green algae are members of kingdom Plantae and therefore may be considered to be plants, other types of algae may not be members of this kingdom. There is debate in the scientific community if red algae should be considered members of the kingdom Plantae, Protista, or their own kingdom, and brown algae are members of kingdom Chromista. What we consider to be “algae” is a polyphyletic group, meaning that all of the types of algae do not have an immediate common ancestor. While algae make up an incredibly diverse group, in general, algae share some traits: they are typically aquatic, are eukaryotes, use photosynthesis to convert energy to matter, and utilize chlorophyll as their primary pigment in photosynthesis. 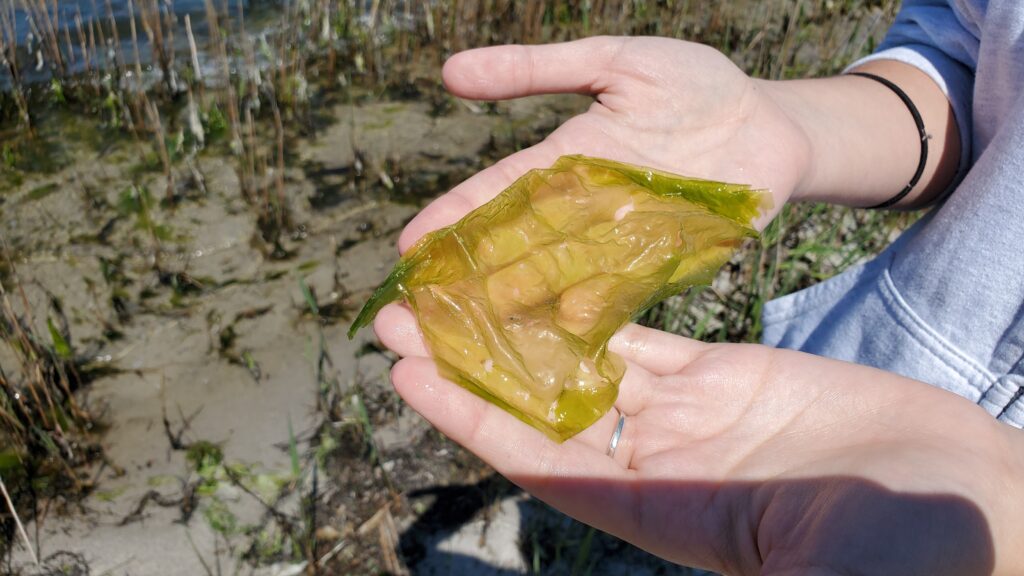 Sea lettuce is a type of green algae that is commonly found in Barnegat Bay. It does not have a vascular system, and it obtains its nutrients directly from the water column. Photo credit: Save Barnegat Bay.

The structures between what are commonly known as aquatic plants and algae differ. Plants, unlike algae, have roots, stems, leaves, and a vascular system. These structures allow plants to take up nutrients, such as nitrogen and phosphorus, from the soil. Green algae, such as sea lettuce, instead take in nutrients from the water column.

Because algae take in nutrients straight from the water, an overabundance of nutrients in the water column can result in extreme algal growth. Let’s break down how this happens:

Plants and algae need certain nutrients to live and grow. Some of these nutrients, such as phosphorus and nitrogen, are known as limiting nutrients because they are found in small quantities in nature, so the amount of them available limits how much plants can grow. In a healthy aquatic ecosystem, there are small amounts of phosphorus and nitrogen in both the water and the soil. This ensures that both floating algae and rooted plants can obtain nutrients, while making sure algal growth is restricted to an amount where they are not blocking essential sunlight needed for photosynthesis from plants.

Human activity can greatly increase the amount of limiting nutrients that make their way into the water. Lawn fertilizer, dog waste, grass clippings and other nonpoint source pollution contain nitrogen, which can be carried from the land to the bay by runoff and groundwater. The excess nitrogen in the water column allows algae to proliferate, while eelgrass beds get little to none of this extra nitrogen because they best absorb nitrogen from the soil. The addition of excess nutrients into the water is known as eutrophication. As a result, the algal bloom occurs, and eelgrass beds may have difficulty surviving due to there being such a high presence of algae.

In addition, the algal bloom can have devastating consequences on more than just aquatic plants. While the additional photosynthesizing algae initially adds dissolved oxygen to the water, it can soon result in reduced oxygen levels. This occurs because as the algae dies, it is consumed by bacteria. As more and more algae die, more and more bacteria reproduce. As the bacteria consume the algae, they also consume large amounts of oxygen from the water column. When there is a state of reduced oxygen in the water, fewer species can survive. This condition is known as hypoxia. In extreme cases, virtually all oxygen is depleted from the water, and only mosquito larvae can survive in the water. This is known as anoxia. 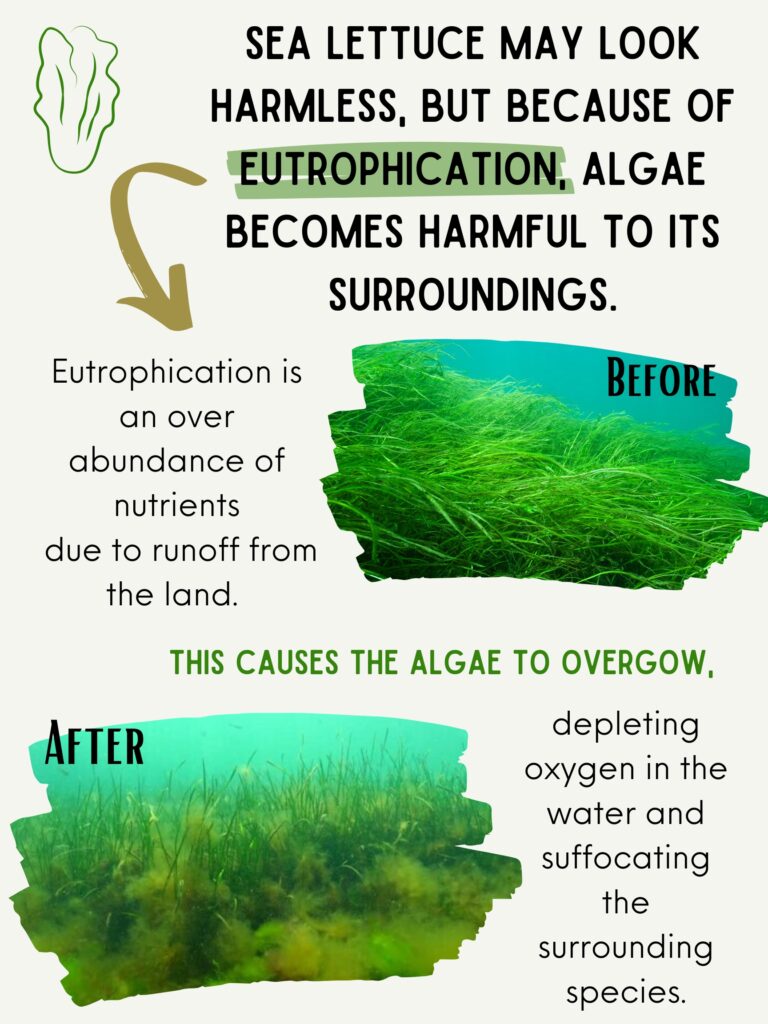 The Barnegat Bay ecosystem relies heavily on the health of eelgrass beds. Because of the calm water and seagrasses, the Barnegat Bay is an ideal nursery for many estuarine and marine species. Many aquatic species lay their eggs and live as young in the beds, and others rely on the eelgrass beds for habitat and food their entire lives. Many of these species are important to local fisheries, such as blue crabs, scallops, clams, and many juvenile fish species. Eelgrass also helps sustain migratory waterfowl populations, as many consume eelgrass, and it helps support populations of birds who predate on species who live in the grasses.

Seagrasses like eelgrass are imperative to maintaining high-quality water and protecting the coastal environment. Eelgrass helps to support high quality water by filtering pollutants and trapping sediment, resulting in clearer and cleaner water. The grass beds also help to reduce wave energy, which protects our coastline from erosion. Eelgrass may also help reduce the effects of climate change because it absorbs and stores carbon dioxide and methane, which are known greenhouse gases. It is estimated that one acre of seagrass can sequester 740 pounds of carbon each year, which is about the amount released by driving a car 3,860 miles.

The continued survival of eelgrass beds is essential if the local ecosystem and the planet is to be protected. To learn more about the importance of seagrasses like eelgrass, check out a cartoon by Barnegat Bay Partnership click here.

An active area of research in Barnegat Bay is seagrass distribution. This involved monitoring seagrass beds, restoring the bay environment, and learning why grasses have stopped growing in some areas. Elizabeth Lacey, an associate professor of marine science at Stockton University, is actively involved in this research and works to show her students the importance of seagrasses. Lacey has provided students and the public with an online field trip where she discusses the importance of grass beds and seagrass restoration. To watch, click here.

To protect the Barnegat Bay, we all need to do our part to keep eutrophication to a minimum and protect eelgrass beds. This process begins in our own yards. If you have a pet, be sure to pick up and properly dispose of their waste. When selecting plants for a lawn or garden, opt for native plants that do not require fertilizer and that help to absorb and filter stormwater. Refusing to fertilize your lawn is best for the bay, but if you do choose to fertilize, pick one that uses slow release nitrogen, and use as little as possible so less excess makes its way to the bay.

Another way to help protect eelgrass is to take care when spending time in the bay. Jet skis and boat motors can damage eelgrass beds, so it is important to be cautious when participating in these activities to avoid damaging the habitat. Unsecured boat anchors can also drag along the bottom of the bay and uproot eelgrass. In addition, digging for clams in eelgrass beds can uproot the grasses, so it is best to avoid digging in these areas. 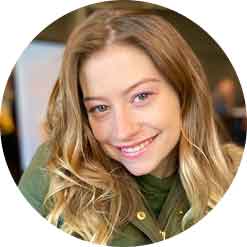 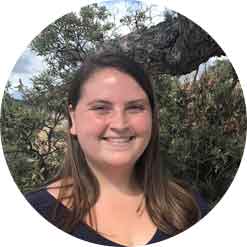