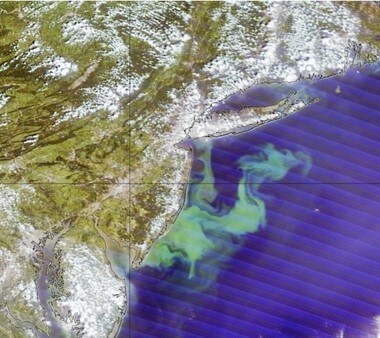 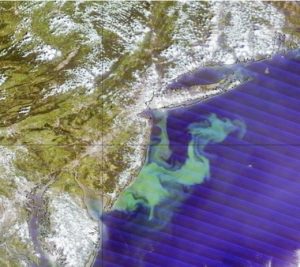 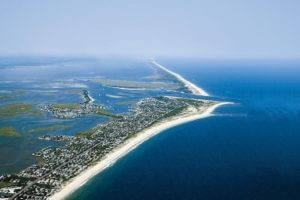 The Organization for Economic Cooperation and Development gave eutrophication one of its first definitions as “…an enrichment of water by nutrient salts that causes structural changes to the ecosystem such as: increased production of algae and aquatic plant, depletion of fish species, general deterioration of water quality and other effects that reduce and preclude use.” In other words, too many nutrients are added to the water (most often nitrogen and phosphorus in the Barnegat Bay watershed) and cause a dramatic increase in algae and plant life, known as an algae bloom. These algae die off and are decomposed by bacteria. These bacteria use up oxygen when they are decomposing the algae, and the lack of oxygen causes fish kills (large quantities of fish dying at once). These eutrophication events have the potential to overwhelm virtually any life in that area of water. This can put an ecosystem at risk of destruction that it can’t bounce back from. 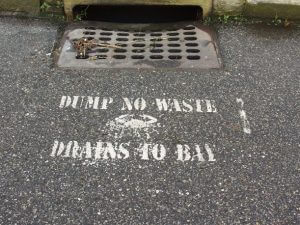 All bodies of water undergo a natural eutrophication process, but the rate of the eutrophication process has increased to an unnaturally high level of occurrence due to human activity. This is known as cultural eutrophication. Fertilizers used on crops, lawns, gardens and just about anything plant-related have high concentrations of nitrogen and phosphorus, the excess of which is then carried to major bodies of water by runoff. Surface runoff is the water that occurs when there is excess storm water and meltwater (among other things) that flows over the earth’s surface. Eutrophication can also be caused by the discharge of waste water into water bodies. The human waste provides nutrients that accumulate and cause algae blooms and fish kills, just like fertilizers. The last thing that can cause eutrophication, is the reduction of self-purification capacity. Lakes will accumulate soil and sediment over the years, and the sediment absorbs copious amounts of pollution and nutrients, and eventually enough will be absorbed that an algae bloom occurs.

So, what do jellyfish and eutrophication have in common with each other? Well, first the nutrients are added to the water by runoff. These nutrients stimulate the production of phytoplankton (very small, photosynthetic plankton), which in turn increases the zooplankton (slightly larger plankton that prey on phytoplankton) population. Zooplankton happen to be the jellyfish’s favorite food. The phytoplankton also increase the turbidity of the water, which negatively affects the ability of fish to hunt since they are visually-feeding animals. As mentioned before, the excess of nutrients will cause a low-oxygen environment (also known as an anoxic environment) once the algae die and begin to decompose. Fish will often die in this anoxic environment, but jellyfish are tolerant of low oxygen environments where most other animals are not. 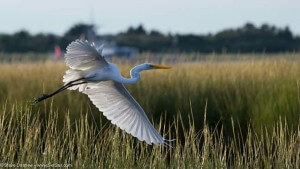 The most common jellyfish of Barnegat Bay is the sea nettle (Chrysaora quinquecirrha) which has dramatically increased in population size over the years, due to increased nutrients entering the bay. Anyone who uses the water, recreationally or commercially, can tell you how the numbers have increased over the years. Dr. Paul Bologna of Montclair State has conducted numerous studies involving sea nettles and Barnegat Bay. Barnegat Bay is considered a highly eutrophic area, which in turn makes it prone to degraded water quality as well as blooms of noxious algal species. The degraded water and algal blooms lead to anoxic conditions, which results in the loss of habitat and possibly the loss of fish species or other species in the area of anoxic conditions. Eutrophication and excessive nutrients is one of the causes of the increase in sea nettles, but there are other causes that should be noted, such as the “hardening” of the shoreline for erosion purposes. Sea nettle polyps need these hard surfaces to settle. In addition, changes in salinity may influence the varied species of the bay, sea nettles included. The increasing water temperatures accelerates the growth rate and maturation of sea nettles.

How YOU Can Help

The most effective way of controlling eutrophication (and therefore jellyfish populations) is to prevent excess nutrients from reaching bodies of water. This doesn’t mean that you must stop using fertilizer altogether, rather apply it at the right time, don’t over fertilize, and just be aware of the chemicals present in your fertilizer. Fertilizing before a big rain storm will cause the chemicals to be washed away before being absorbed by the plants and grasses. Similarly, if too much fertilizer is used, it will lay loosely on top of the soil and will not be bound to it, therefore it will be washed away. In some areas, sewage dumping directly into the water bodies is also a problem, even here in New Jersey during big rain storms, where sewers overflow into bodies of water. The easiest way to reduce the amount of nutrients going into the water bodies is to use items with less or no phosphates or nitrates! Other ways to help the environment are planting native plants that absorb nutrients, planting clovers that fix nitrogen, and reducing storm water runoff to keep excess nutrients out of the nearest body of water. Remember to look at the fertilizer components and pick the one with the least amount of phosphorus or nitrogen. Be smart about your garden! Be careful not to over fertilize! Happy planting! 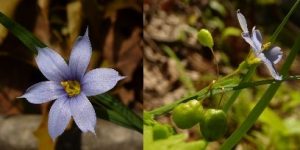