In 2011, the New Jersey State Legislature passed bill A2290, the strictest fertilizer content law in the country. A2290 aimed at protecting the state’s waterways through controlling pollution at a common source, the use of synthetic fertilizers. Most broadly, the bill puts forth a framework for private fertilizer application and regulates fertilizer sales. Homeowners and landscape professionals were advised on acceptable use periods, as well as input amounts to minimize the negative effects fertilizers may have on the environment.

Fertilizer and turf industries claimed they supported environmental action overall but voiced opposition to the strictness and “political palpability” of the bill as it moved through the NJ legislature.

The law, which was eventually signed by Republican Governor Chris Christie, sets standards for nitrogen and phosphorous, specifically, and was set to be implemented in the following three phases:

Notably, the bill calls for at least 20 percent of nitrogen content in fertilizers to be non-water soluble and slow-release. This type allows for chemicals to be released over a longer, more incremental period. Fertilizers under this class category allow for the environment to break down and decompose the material better than traditional types. Additionally, phosphorus application to lawns was prohibited, and fertilizer manufacturers all but eliminated the use of this material to comply with the new set of standards put forth by A2290.

This framework was hugely important in restoring and preserving the health of Barnegat Bay and the surrounding watershed— both of which have been in decline over the years due to overdevelopment and fertilizer use, among other polluting activities. By specifically targeting nitrogen and phosphorus with this bill, lawmakers sought to address the harm that these nutrients cause the environment when accumulated in excess. While nitrogen and phosphorus are important for plant growth and other ecosystem processes, their overabundance gets washed across the watershed and accumulates in waterways, such as Barnegat Bay. When this occurs, algae growth is stimulated, depleting oxygen levels in the water and preventing sunlight from reaching organisms below the water’s surface. Areas where this process, known as eutrophication, occurs often experience mass die-offs and water conditions that can be dangerous to humans. 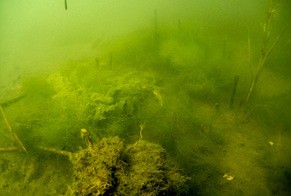 The fertilizer problem is made worse in Barnegat Bay’s watershed because of the sandy conditions of its soil, which allow for excess nutrients to move quickly across the gradient. Once they reach the bay, high nitrogen and phosphorus levels alter the water chemistry and make it difficult for organisms to survive. In recent years, we have observed evidence of this in declining fish, crab, and clam populations and increasing jellyfish populations— both trends that go against the natural order of the bay’s ecosystem.

While scientists do not know exactly how much fertilizer use contributes to pollution in Ocean County, studies suggest that this figure could be as much as 17%. By placing a set of guidelines on the use and manufacture of this potent pollutant, lawmakers hope to heal the bay by targeting its stressors at the source. Many in the scientific community believe this to be one of the most effective methods of curtailing environmental problems: to deal with pollutants at their source, rather than playing catch up by the time they reach places like major waterways or highly sensitive ecosystems.

Save Barnegat Bay played a major role in lobbying for this legislation— in a fight that lasted over two long years. The organization’s original intent was to persuade lawmakers to adopt a 40 percent slow-release benchmark. With this ambitious goal, Save Barnegat Bay worked to negotiate down from there to get the bill passed by the legislature while still maintaining an aggressive timeline for environmental protection. While 20 percent slow-release was a significant reduction from the initial goal of Save Barnegat Bay’s lobbying efforts, the bill still serves as the strongest fertilizer bill in the nation.

Luckily for the health of the Barnegat Bay watershed, important work has been done to ensure that the state’s fertilizer standards are being upheld. Fertilizer contents and agricultural supplies are randomly and regularly tested to monitor nutrient contents. Reports on which products meet nutrient standards and which do not are subsequently released on this information. Those not in compliance are fined. Agricultural practitioners themselves are not specifically monitored under this law — landscapers and homeowners are the target population of these regulations. Policymakers believed that because agriculturalists test their soil every year for nutrient content to uphold peak productivity, it would not be in their best interests economically to waste money on unnecessary nitrogen additions.

Once signed by Governor Christie, the bill was made effective immediately and has now been in effect for nearly 10 years. Looking ahead to the future, Save Barnegat Bay hopes to expand the reach of this bill in preserving the health of the estuary. Places like Lake Okeechobee in South-Central Florida serve as examples of the urgency to pass environmental legislation; Florida’s story with algal blooms and other climate change-related problems are not dissimilar to what we are seeing in New Jersey. Using case studies like Lake Okeechobee can offer us critical insight as to how we can make environmental legislation stronger on our own state’s soil. By continued effort and lobbying for comprehensive environmental policy, we can hopefully reach our ambitious goal of 40-60% slow-release fertilizer sooner rather than later.