On May 1, 2017, Governor Chris Christie signed bill S-227/A-963 into law. This piece of legislation called upon the Department of Transportation, Turnpike Authority, and the South Jersey Transportation Authority to use solely native vegetation for landscaping, reforestation efforts, and habitat restoration from that point forward. Furthermore, the state Department of Environmental Protection (DEP) is required to make an official authoritative list of native plants to be accessible to the public. The bill was introduced to the senate in early 2016 and passed as a moderate bipartisan bill through the legislature. This law served as the catalyst then for an adjacent bill, S-3000, which created the “Jersey Native Plants Program,” which bolstered native plant sales at garden centers and plant nurseries statewide. Under this law, which is part of the NJ Department of Agriculture’s (DOA) Jersey Fresh Program, plants from NJ will be labeled in marketplaces so customers are easily able to identify them as native species.

When Superstorm Sandy hit the east coast in 2012, the region’s infrastructure suffered an enormous blow. Once the state started to rebuild, it began large engineering projects at the cost of a considerable impact on the environment. According to Senator Holzapfel, who sponsored this bill, “During the rebuilding of State Highway 35 on the barrier island following Superstorm Sandy, we worked on this bill [S-227/A-963] to benefit the state both economically and ecologically.” The state of New Jersey made use of American Reinvestment and Recovery Act (ARRA) funds, an economic package rolled out under the Obama administration in response to the 2008-2009 economic crisis for the project. The stimulus package provided federal funds for “shovel ready” projects— plans that had already undergone all required steps of preparation. Route 35 fell under this distinction, and the state proceeded with construction.

Because the state received the green light under the ARRA package, additional work was not required under the state’s permitting processes. In order to avoid having to roll out a complete environmental impact statement (EIS) because the size of the project was so large, the agencies spearheading the project cut it into three segments. By doing so, project planners were able to avoid having to meet certain environmental protections on the federal level in order to expedite the reconstruction process.

From the very beginning, Save Barnegat Bay and other activist groups had major concerns over the environmental impact of the project. One significant area of concern was the fact that the reconstruction was taking place on a barrier island, where most of the stormwater system is underwater. This made it difficult to build a durable piece of infrastructure that would be both resistant to future extreme weather events and safe for heavy human use. When Sandy hit and major segments of the roadway were wiped out, the project qualified for resiliency funds, which were eventually put towards stormwater system upgrades.

In repairing this damaged major highway after Sandy, plans involved disrupting approximately twenty-four miles of roadway corridor to rebuild. Upon conclusion of the project, remediation would have to take place to restore the area to some semblance of its former aesthetic and function. Plans for this included replanting disrupted areas, stabilizing soils, and replacing vegetation. However, rather than replanting native species, project managers proposed planting non-native species, most of which originated in Asia.

Save Barnegat Bay was alarmed by these plans, which essentially tore out flourishing native vegetation that was equipped to handle the climate and conditions of the area with decorative plants that could potentially destroy critical habitat for migrating birds and insects. Environmental practitioners were quick to point out the futility in this project decision, as non-native plants are far less likely to prosper and require higher amounts of care and resources to survive in their non-native range. Subsequently, using native vegetation would cost taxpayers less money for their upkeep. New Jersey is home to a delicate ecosystem of an estimated 2,100 native plant species— nine of which are endemic to the region and do not grow anywhere else on Earth. 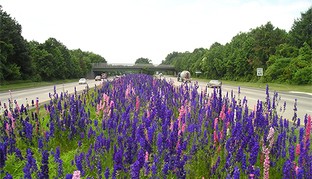 Non-native species are often the source of foreign diseases and pests that threaten to decimate the fragile balance of the environment’s regulating processes, as well as the survival of its flora and fauna. Choosing instead to replant with indigenous vegetation provides an opportunity for wildlife to colonize the area for their habitat. Additionally, the bill establishes more hospitable zones for wildlife along New Jersey’s sprawling 3,352 miles of state-owned roadways.

Once signed and passed through the legislature, the bill stipulated that the mandate should go into effect “no later than the 180th day after the date of enactment.” Additionally, the bill outlined that before this mark, after 90 days of being signed, the Department of Environmental Protection should take steps to identify native plants that would be most likely to survive in particular zones across the state.