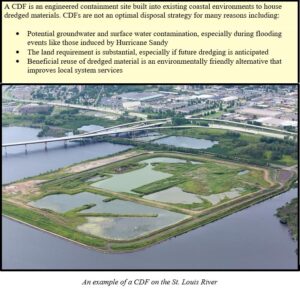 New Jersey Department of Environmental Protection’s (NJDEP) Office of Dredging and Sediment Technology (ODST) issued a permit to the Bureau of Coastal Engineering (BCE) for the construction of a Confined Disposal Facility (CDF). The permit would allow the BCE to dredge the Westecunk Creek State Channel in Eagleswood Township and store the dredged material in a CDF. However, this permit was issued despite the BCE’s inability to perform the following required regulatory analyses:

These regulatory analyses are required for several reasons:

An alternatives analysis ensures the project design – in some form – will meet the needs of project stakeholders and comply with the appropriate rules and regulations. In this case, the BCE’s failure to consider alternative project designs is an issue of heavy lifting. To comply with current coastal rules and to maintain harmony between the wildlife of the Barnegat Bay ecosystem and its inhabitants is not an easy task. What is easy, is adhering to precedent and constructing a CDF. What is necessary for protecting the Barnegat Bay and its inhabitants, is departing from precedent and considering alternative project designs that mitigate the impact of dredging on the Barnegat Bay ecosystem. 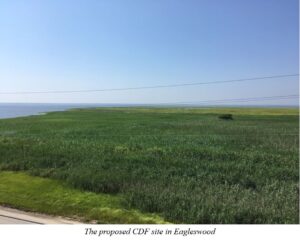 The purpose of an HIA is to ensure that projects implemented by the NJDEP will not negatively impact ecosystems, their services, and the wildlife they support. The BCE’s failure to conduct an HIA at the intended Eagleswood CDF site is to purposefully maintain ignorance of the site’s status as breeding grounds for species of endangered osprey and herons. It is also to ignore the site’s proximity to the Edwin B. Forsythe National Wildlife Refuge and the CDF’s potential impacts on this critical landscape and recreational area.

Overall, the construction of the CDF at Eagleswood is not only an environmental atrocity “permitted” by the very governing body (NJDEP) that is tasked with the protection of the NJ environment. It is also a symbol of the larger issues of oversights in the internal NJDEP permitting process and failures to integrate environmental considerations into the project design and its implementation. If the NJDEP is serious about protecting the NJ environment, they will alter their current project designs to include beneficial reuse of the dredged material to support the Barnegat Bay ecosystem and its residential inhabitants.