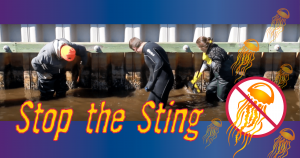 Our Stop the Sting Campaign is part of a coalition focused on reducing bay nettle populations and working on jellyfish education throughout Barnegat Bay. Through a partially funded New Jersey Department of Environmental Protection (NJDEP) grant, we are working with our partners in 3 targeted lagoon communities to study experimental population reduction methods in order to find the best control procedures.

To stay up to date on Bay Nettle Updates and campaign projects, please fill out the form below!

How YOU Can Help!

Bay nettle jellyfish have been taking over our lagoons making swimming in our beloved waters almost unenjoyable. You can sign up to help us with our Campaign and Stop the Sting TODAY! 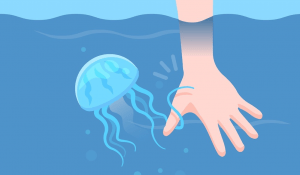 Get Your Bulkhead Scrubbed

Volunteer divers from the Berkeley Township Underwater Search and Rescue Squad (BTUSAR) will be scrubbing floating docks and bulkheads in targeted lagoon communities. Through this scrubbing program, they will be removing bay nettle polyps that may be settling on homeowners’ property.

Get Your Floating Dock Removed

BTUSAR will also be responsible for our Floating Dock Program. Volunteers are offering to remove or relocate floating docks in target lagoon communities either temporarily or permanently. Homeowners who wish to participate will have to work out relocation details with BTUSAR prior to the desired removal date.

Right now, the Berkeley Dive Team will be focusing on the Berkeley Shores Lagoon Area. If you live in this area and would like more info or to sign up for this program, please email: [email protected] 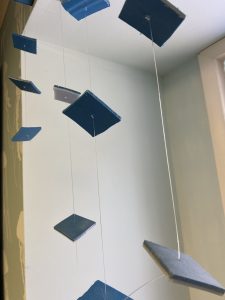 Save Barnegat Bay will be distributing settling plates to community members who would like to participate in our Community Science Program. The installation process for these plates is very simple, and anyone living on Barnegat Bay or off of a lagoon can participate. All you have to do is hang the settling plates from your bulkhead for the summer season. During installation, please make sure that the plates are at least partially submerged. By the end of the summer, Save Barnegat Bay and BTUSAR will be hosting a few Observation Days. Volunteers can sign up during this time to bring in their settling plates and learn about what has been growing on their plates and where these bay nettles are most prominent in the Bay!

*SBB Observation Date(s) for 2021 will be posted soon* 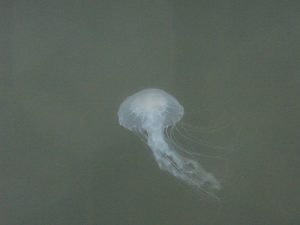 What are Bay Nettles?

Bay nettles are stinging jellyfish found in Barnegat Bay. Their diet consists mainly of fish eggs, larva, zooplankton, and other small and drifting animals. Unlike other native species found in the bay, bay nettles are able to thrive in warm waters with low oxygen levels. This type of habitat hinders its prey which makes them slower and easier to catch. As bay nettle populations rise in these more compromised water bodies, populations of native species will fall.

To learn more about these jellyfish and their friends living in Barnegat Bay check out these articles:

Lifecycle of the Bay Nettle

Bay nettles begin their life cycle in a polypoid stage when they are only millimeters long and have small tentacles used for feeding. During this polyp stage, the bay nettles must attach or settle onto a sturdy surface. It can either remain attached to a surface as a sessile (immobile) polyp or change its form to the medusa stage. The medusa stage of the bay nettle’s life has six steps before it becomes an adult medusa. At every step, the medusa grows in size and number of tentacles until it takes its familiar shape, with the large top or bell and 16 tentacles hanging down from the bell.

A polyp is the stage of the bay nettle lifecycle where it reproduces by “cloning” itself right before they become fully developed adult jellyfish. This type of reproduction is known as asexual reproduction. In this process, the bay nettle creates genetically identical offspring.

Scientists attribute the rise of bay nettles and jellyfish in Barnegat Bay to a number of factors: pollution, development of the bay’s shoreline, and climate change. Not only can bay nettles and other kinds of jellyfish survive in warmer, hypoxic (low oxygen) waters, but they thrive in it. As nutrient pollution pours nitrogen into the bay, its oxygen levels decrease, which suffocates larger competition and promotes the growth of other kinds of zooplankton.

An increase in stinging jellyfish could mean the decline of fishing and recreation on the bay. If left unchecked, their growth and diet will deplete the bay of the species that keep it healthy. For us, swimming, sailing, and anything else that involves going into the water could become undesirable and, in the case of the clinging jellyfish, dangerous if stung. Barnegat Bay would no longer be a flourishing ecosystem of diverse life.