The area of land making up the Barnegat Bay’s drainage system is known as a “watershed” and covers over 600 square miles. The watershed’s characteristics vary from coastal dunes and marshes to protected areas such as the Pine Barrens within the NJ Pinelands.

Over 560,000 people reside within the Barnegat Bay watershed, which includes nearly all of Ocean County and portions of Monmouth County. The population doubles in the summer as people flock to the shore from places such as Philadelphia, New York City, and beyond. The Barnegat Bay Watershed is also the second fastest growing area in New Jersey.

Barnegat Bay is the largest body of water in New Jersey, extending nearly 200 square miles from Bay Head south to Little Egg Harbor.  Collectively known as the Barnegat Bay-Little Egg Harbor Watershed, the rivers from Ocean County flow eastward into the bay and feed it with fresh water daily.  Outlining the bay to the east is a series of barrier islands, cut only by the Manasquan Inlet, Barnegat Inlet, and Little Egg Harbor Inlet.

Barnegat Bay is a unique estuary ecosystem with different habitats including barrier islands, eelgrass beds, salt marshes, tidal flats, and maritime forests (see below for descriptions). Estuaries are where saltwater from the oceans and freshwater from the rivers intermingle to form brackish water.  Many species of shellfish and finfish depend on the Barnegat Bay as an important nursery during their life cycles. There are several natural factors that are important to their growth and survival including temperature, salinity, tides, and seasonal changes.  Some species have a very narrow range of temperature and salinity that they can survive in, which means any extreme changes could be detrimental to that species.  Tides can be beneficial to smaller prey species avoiding larger predators and they also bring in valuable nutrients from the ocean.

Beginning with the smallest organisms, plankton and plants make their own food from the sun.  Eelgrass beds are extremely important to the ecosystem because they provide hiding places as well as nesting habitat for small fish such as minnows and crabs.  The Barnegat Bay has a complex food web, which supports clams, mussels, grass shrimp, baitfish, bluefish, striped bass, and wading birds, to name a few.  Other notable species are ospreys and bald eagles, river otters, raccoons, foxes, and humans. 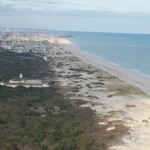 On a typical barrier island, the beaches gently slope from the dunes down to the ocean.  On the opposite side of the dunes, vegetation grows in more abundance until they reach the lagoon, oftentimes creating maritime forests if left untouched.  When storm surges, hurricanes, and tropical storms come in contact with barrier islands, they are slowed down and their power is slightly diminished. 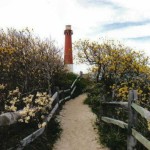 Maritime forests, or marine forests, are located at the edges of salt marshes and are prone to high winds, sandy soils, and salt spray from the estuary.  They contain all types of plant life including deciduous, coniferous, and broadleaf evergreens, depending on where they are located along the coastline.  Mammals such as deer, raccoons, and rabbits will feed on the plants and contribute to nutrients in the soil.

As you travel towards the water’s edge, plants will be stunted in growth due to the salt spray. The highest biodiversity and densest area will be in the center of the maritime forest or closest to the mainland. 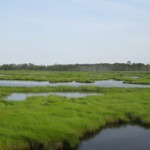 Salt marshes are tidally influenced and rely heavily on tides, currents, and rainstorms to provide nutrients for the plants and animals that inhabit them.  The vegetation of the salt marsh is highly specialized to filter out nutrients such as nitrogen and phosphorus.

This allows runoff from the mainland to filter through a salt marsh before entering the estuary, creating a less polluted aquatic ecosystem. Species that inhabit these areas range from mud snails and oysters to great blue herons and ospreys. 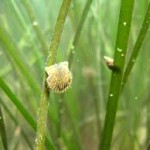 Similar to plants on land, submerged aquatic vegetation grow the same way, just underwater.  They are an excellent source of oxygen as well as a key habitat for juvenile species of fish and invertebrates, such as bunker (menhaden) and blue crab.  Their presence in the water is also a great indicator of the general health of an estuary.

While underwater, their stalks and roots assist in settling out sediments in the water column, similar to the way dune plants will capture and hold sand that is wind swept or pushed by storm surges.  When there is an overabundance of nitrogen and phosphorus in the water, due to heavy runoff from fertilizers, their roots can withstand these nutrients so that the surrounding water does not become polluted. Without submerged vegetation, the influx of nutrients could lead to severe algal blooms and eutrophication. 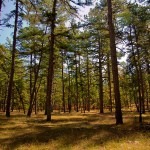 The western shores of Barnegat Bay directly border the Pine Barrens or Pinelands. The name “pine barrens” refers to the area’s sandy, acidic, nutrient-poor soil. Supporting more than 500 species of animals and 800 species and varieties of plants, this heavily forested area of coastal plain stretches across more than seven counties of southern New Jersey.

The area is also notable for its populations of rare pygmy Pitch Pines and other plant species that depend on frequent fires to reproduce. The sand that composes much of the area’s soil is referred to by the locals as sugar sand.