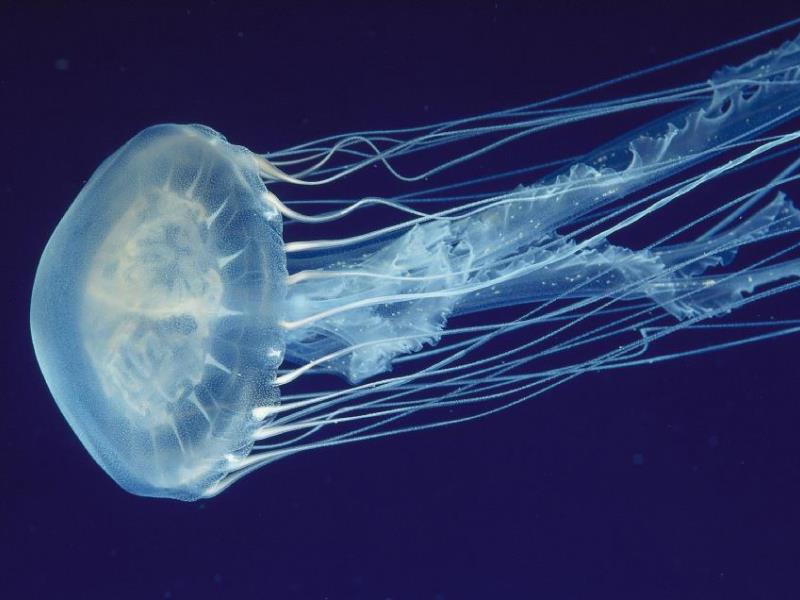 Barnegat Bay is home to hundreds of different aquatic species, ranging from the Snowy Egret above its waters to the Milky Ribbon Worm within its depths. All play a vital role in the bay’s health. But, with the increased development of its shoreline for the past ten years, the balance of its ecosystem is threatened by two forces that are both familiar and foreign, old and new. They are the rise of the sea nettles and clinging jellyfish population.

Sea Nettles, or Chrisaora quinquecirrha, are small stinging jellyfish that have been indigenous to the bay for thousands of years. Their diet consists mainly of fish eggs, larva and different types of zooplankton, and they can survive in waters less ideal for other aquatic life. Though they are mostly harmless to humans, a large number of them could devastate the bay of its fish, crustaceans, and algae.

Clinging jellyfish, or Gonionemus verbenas, are not native to Barneget Bay, but are known to linger in the Pacific Ocean and the Mediterranean Sea. They were first sighted near the bay as recently as 2016; and just this past summer, researchers and biologists have confirmed their presence. Like their distant cousins, the sea nettle, they also feast on fish eggs and larva and can survive in nutrient-deficient waters. Unlike sea nettles, however, some clinging jellyfish can be very venomous to humans if stung by one. We, unfortunately, got the very venomous kind.

Why We Are Concerned

The rise of sea nettles and jellyfish in Barnegat Bay have been well observed and documented since 2006. Before the last decade, the sea nettle population remained pretty consistent and concentrated to the north end of the bay (i.e Bay Head, Mantaloking, Toms River), with a small dip in its numbers right after Sandy. However, as the bay’s shoreline began reconstruction after the superstorm, their numbers have skyrocketed , their blooms expanding further south.

Scientists attribute this increase to a number of factors: pollution, development of the bay’s shoreline, and climate change. Not only can sea nettles and other kinds of jellyfish survive in warmer, hypoxic waters; they thrive in it. As pollution from runoffs and human interaction (ie. cars, boats, etc.) with the bay pours nitrogen into its waters, its oxygen levels decreases, which suffocates larger competition and promote the growth of other kinds of zooplankton.

Development of the bay’s shores not only brings in more people and pollution, it also brings more surfaces to which sea nettle polyps like to attach. A polyp is the stage in a jellyfish lifecycle where it can reproduce through budding, or “cloning,” right before they become fully developed adult jellyfish. Sea nettle polyps like to settle on sturdy surfaces, such as bulkheads, pilings and floating docks, which means that the more we build along its shoreline, the more opportunity they have to expand their numbers.

An increase in stinging jellyfish could mean the decline of fishing and recreation on the bay. If left unchecked, their growth and diet will deplete the bay of the species that keep it healthy. For us, swimming, sailing, and anything else that involves going into the water could become undesirable and, in the case of the clinging jellyfish, dangerous if stung. Barnegat Bay would no longer be a flourishing ecosystem of diverse life.

What We Are Doing

Save Barnegat Bay, Montclair State University Professor Dr. Paul Bologna, and the Berkeley Township Underwater Search and Rescue Team are teaming up to educate and begin attempting to control the population of sea nettles. Lagoons in Brick, Toms River, and Berkeley will the towns that are focused on. A Sea Nettle Education Coordinator will be hired to coordinate the teams while educating the public.

The NJDEP’s Division of Science, Research and Environmental Health have been overseeing the observation of jellyfish activity around the bay and Atlantic Ocean. Along with cleaning up the bay, they believe the best way to combat the rise in sea nettle population is to closely observe them, putting more emphasis on their polyps. Their goal isn’t eradication, but rather controlling where they roam and how much they reproduce. For example, efforts like The Sea Nettle Barrier Project seek to keep them away from swimmers on bathing beaches, using a system of underwater nets (see https://www.savebarnegatbay.org/2011-sea-nettle-barrier-project-project-report/ for the full 2011 report).

When it comes to invasive species, like the clinging jellyfish, scientists and advocates have to ask another set of questions. Are they here to stay, or should we make efforts in driving them away? Local scientists have not yet found evidence of their polyps, but they know where adult clinging jellyfish like to hang out — among the submerged sea grass and algae in the bay’s back estuaries. Right now, they are finding out all they can about this new jellyfish that is slowly making Barnegat Bay their home.

What You Can Do

Educate yourself about the issue and how you can decrease pollution in the bay. We advise all swimmers to stay away from shallow, highly vegetated areas, where clinging jellyfish are most likely to settle during the day. If you think you see one, do not try to pick it up. Take a picture of it and contact Dr. Paul Bologna at [email protected], or get in touch with us.

Read these sources to learn more: